JABBIT will be sold in a 2-person pack consisting of 2 throwers (colors: Dandelion Green and Sky Blue), and 1 ball (color: Tangerine Orange).

JABBIT is the latest creation from a company that has a design mandate to consider play-value on par with salability. That philosophy has led to OgoSport becoming a perennial winner of many of the top parenting, kids choice, toy, and design awards for their creations, and has propelled the company's product line into over 1500 specialty toy stores throughout the United States and over 40 other countries.

Continued Mr. Williams: "After we started testing early prototypes of JABBIT we quickly realized that it wasn't just for kids ages 6+ but actually for adults as well -- kids can sling the ball underhand 10' ft or less at a slower speed, but adults can also sling the ball overhand 20'-30' ft at a faster speed. We designed the material of the launcher/thrower and ball from a durable and flexible plastic that is easy to assemble and will stand up to the rigors of outdoor play." 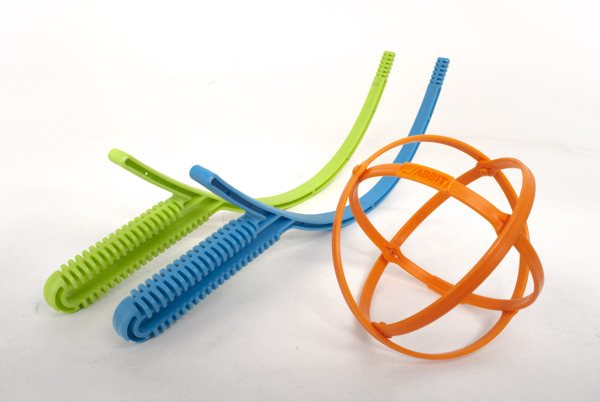