The design of Batapult brings a new experience to the game of baseball as well as creates the same striking force as a standard bat but with much less effort. Children ages 6+ can use the bat's catapulting action to strike the ball and send it flying up to 200 ft. Batapult is constructed of durable plastic and comes with a dimpled polyethylene foam ball.

Since the hinging action happens above the handle, children don't need to be as strong to swing the bat because some of the strain is eleviated, making it easier.

Batapult's unique design moves the bat weight closer to the grip- which makes the bat feel lighter during the swing. The result is faster swings with much less effort.

The younger brother to Batapult, Batapult Jr. teaches kids to knock em' out of the park with ease! The bat allows for super-power hits, or use the built-in pitching attachment to throw.

The scoop built into the end of the bat can hold the ball onto the bat allowing the child to swing the bat and watch the ball launch into the air. The scoop also makes it easy to pick up the ball on the ground pushing the bat on top of it.

Younger kids that would normally be frustrated with baseball not able to hit an incoming pitch can now experience the joy at a younger age and learn the mechanics of swinging.

AeroZipp Disk is a flying disk launcher for children ages 6+ than can launch disks over 175 ft. The disks are made of a flexible, plyable plastic with a whistle chamber built in so they whistle as they glide. The disks can be thrown back and forth between players by hand or using the AeroZipp Disk launcher.

Another key feature of the AeroZipp DIsk is the "Launch Activator", a trigger that sets the AeroZipp launcher in three different positions for catching, throwing and storing.

In addition to growing a loyal following of consumers who share in the company's open play philosophy, OgoSport products have also won the attention of the toy industry with awards such as the Parents Choice Award, TillyWig Awards, Dr. Toy Award, Canadian Toy Testing Council, The National Parenting Center Award, and NAPPA Award. 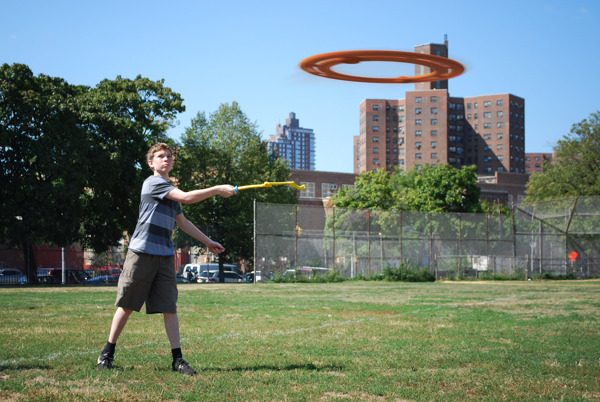